Made in China Journal | Article | On Becoming a ‘Blue-eyed, Blond American Friend’ 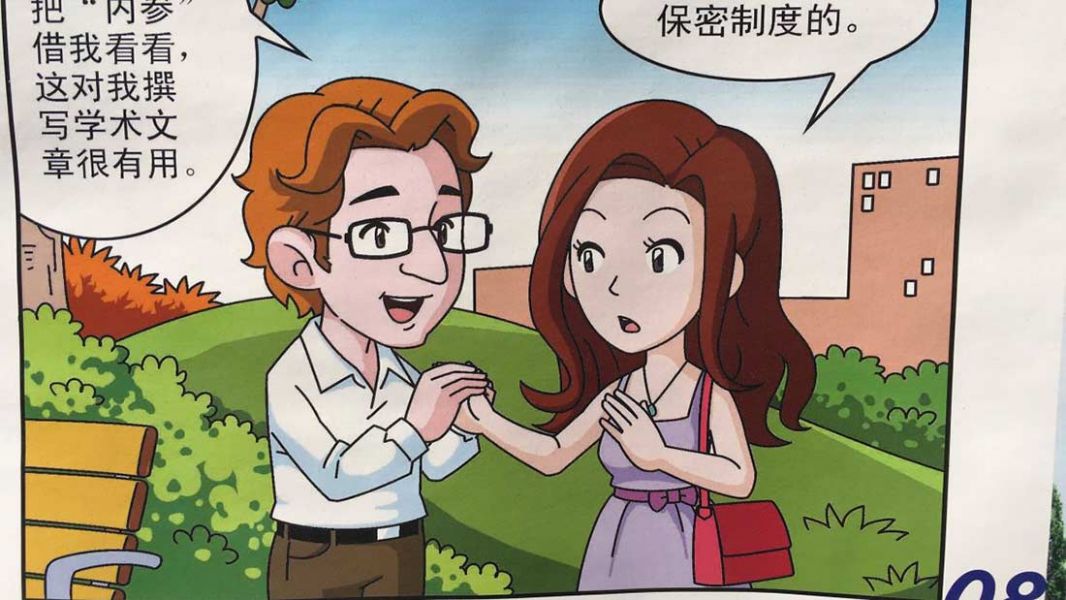 Difficult Fieldwork, Positionality, and Being a Participant-researcher

Made in China: Bless You, Prison July–September 2019

Getting to my fieldwork site was hard. I spent the first year of my PhD planning and finding funding for my field research, but my preparations fell apart spectacularly when my host university in Beijing informed me it could not sponsor my visa. Nearly a year later, just before I finally arrived in my new field site in Shandong, my host urged me to change topic and abandon my focus on LGBT migrants. After all, as a white foreigner in a small, provincial city, I would stick out like a sore thumb, and anything edgy in my research could be easily monitored. I frantically put together a new project from scratch at the last minute, and, as a result, spent my fieldwork always feeling a few steps behind.

So, I was surprised when I met experienced Chinese researchers and was told that what I faced was not the limitations of being a foreigner dependent on the good graces of the government. Rather, these researchers explained, I was in the privileged position of being a white foreigner researching in China.

Doing social research in China is challenging. Official statistics can be unreliable, important information is kept out of the public eye, safety is hard to guarantee, and access is difficult to secure. Social researchers have had to grapple for a long time with the webs of unspecified but uncrossable lines that define China’s censorship regime, and figuring out how to work productively within the limits imposed on research remains difficult. Doing research in this context can be anxiety-inducing and demoralising, especially for ‘outsider’ researchers who already face linguistic and cultural obstacles. However, outsider research also presents privileges and opportunities, though they are often not knowable beforehand.

Any discussion of safety in and access to conducting research in China needs to be cognisant of power imbalances and forms of privilege that affect exposure to Chinese disciplinary systems. White privilege and its effects are not confined to the West (Faria and Mollett 2016). It is different, and potentially much more problematic, to arrest someone when it would spark a diplomatic incident than it is to arrest a Chinese citizen. Beyond political safety, access issues are also unevenly distributed between Chinese and foreign researchers due to considerations as diverse as national security, extensiveness of guanxi networks, and cultural competence, as well as the ability to generate rapport with participants and their interest in our research. As a result, the experience of field research in China varies a great deal by nationality and race.

This variation is important because ‘outsiders’, particularly non-nationals who are white, are overrepresented in China studies, largely due to the Eurocentric economies of knowledge that typify academia generally. But the outsider/insider distinction masks a more complicated reality. Being local does not necessarily imply being an insider (Kjellgren 2006; Yeh 2006). Societies are not homogeneous, and many question whether true ‘insider’ research is possible due to power imbalances inherent to the research process (Cui 2015; Liu 2006; Lü 2017). Those of us who are unquestionably ‘outsiders’ are also rarely straightforwardly alien to the contexts we research. We are connected by training in language, culture, and history, friendships and familial relationships, and often have previously lived in the locations we study.

Still, it would be dishonest to pretend that the experience of Western researchers in China is the same as that of native Chinese researchers. This difference is not just because of access issues or different research trends and audiences in China and the West. Although the language and culture issues that we as foreign researchers in China face may seem obvious, the ways these considerations are embodied by us in ‘the field’ and how they guide us towards specific kinds of research encounters are perhaps less obvious.

The differences in the kinds of research encounters we can access are not necessarily defined solely by the limits they impose. I learned that I had a degree of freedom from government interference. In the worst-case scenario, I could leave the country, while Chinese researchers would be stuck. Beyond safety concerns, I also had the privilege of asking stupid questions to my advantage. I could even ask sensitive questions with the plausible deniability of being an ignorant foreigner. But most importantly, people would want to talk to me.

In areas with few white faces, I attracted a lot of interest. I had heard so many times that Chinese people buttoned up around researchers (Cui 2015). But this was not the pattern in my research.

One important participant I met while buying a savoury pancake (煎饼果子) from his stand on the street. He struck up a conversation while he smoothed the batter and added the egg, then sauces and herbs, and finally a cracker before folding it over and sliding it into a paper sleeve. He made me promise I would bring him a US dollar. A few pancakes later, to his delight, I finally remembered to bring one. That dollar paid for the day’s pancake, and by this point, we had found plenty to chat about as he cooked for me. Months later he would skip his much-needed mid-afternoon nap for an interview.

In the social sciences, feminist and critical race scholars, among others, have long argued that research by different kinds of people produces different kinds of knowledge. All knowledges are ‘situated’ (Haraway 1997; McDowell 1992; Rose 1997), that is, specific and subjective, rather than universal, neutral, or objective. This is not just because participants give unreliable narratives or because language is imperfect, but because the specificity or ‘positionality’ of the researcher is ingrained within the truths produced through research (Bonham and Bacchi 2017; Harding 1992).

For field researchers, our presence in ‘the field’ is part of what constitutes it as ‘the field’, and, as a result, ‘the field’ is specific to the researcher, not just the participants (Katz 1994). In the case of ‘Pancake Man’, as I anonymised him in my research, our initial encounter would have needed much more negotiation on my part if I had not been exotic to him. Opportunities for knowledge production opened because we fit together in this way.

Other interactions were less straightforward. There were people who were suspicious of my intentions. Such situations, when interviews suddenly went off the rails, when people clammed up or looked hurt without explanation, were confusing and upsetting. I did not know what it was about me that was off-putting, and worried about how I had offended people without a lesson for how to avoid it in the future.

Just as confusing were the times I discovered that I had understood this rapport-building all wrong. Once, long after returning home, a participant asked me over WeChat how my shop was doing. Presumably, she thought I was studying her experience of running a shop so I could do the same.

Another time, I became friendly with practitioners of ‘fire therapy’ (火疗) in a business that felt distinctly like a pyramid scheme. After watching the treatment, I was unsurprised to find a photo of myself in a practitioner’s WeChat feed. What did surprise me, as a Jew, was how I was described: as a ‘blue-eyed, blond American friend’ (蓝眼睛，黄头发的美国朋友).

Jews come in all colours, but I had never thought of myself in such Aryan terms. What is important here, however, is not how I was described phenotypically. Rather, it is the work this description is doing. In this mini-advertisement, I am not my own self. I have become a representative of the West who, positioned high up the global pecking order, has deemed ‘fire therapy’ worth learning about. The presence of a white body in this space brings unearned authority—my ‘blondness’ is persuasive. I thought the practitioner wanted a foreign friend, or, awkwardly, that there may have been a romantic interest, but I was not able to perceive how she might be trying to capitalise on our relationship until there was suddenly evidence of it.

The value I gained from these experiences came from the types of knowledge produced by my own participation in my participants’ lives. By being seen as exotic by ‘Pancake Man’, I was incorporated into his world on terms that were not entirely my own—a dynamic that remained present in interviews. And in my conversation with the shopkeeper who thought I was opening a shop of my own, I had to face up to both my own linguistic and cultural failings, and the assumptions my participants were making about our work together. I had no idea what they were thinking, but their assumptions were important in shaping how our time together played out. The same is true in my ‘fire therapy’ example. In the process of being used, I gained access to a site that I would not have known about. I also gained insight into how the direct sales model that I was looking at worked and how it blurred boundaries between friends, customers, and potential business associates. In this process of ‘participating’, my worries about not being a native or an ‘expert’ on local culture were beside the point.

Interviews and ethnographic data are not transparent representations of reality. Data is produced through the recording of interactions that include the researcher. A focus on positionality shows that encounters do not just produce specific and temporary versions of our participants. Specific versions of the researcher also emerge anew each time (Mazzei 2013; Simpson 2015). In the cases I have described, though I could make an educated guess at what my whiteness and foreignness would mean to people, my positionality was never fully transparent to myself or to them (Rose 1997). Even in hindsight, this remains true.

In social encounters of all kinds, everyone and everything arrives together with that encounter. We are important only insofar as we are inseparable from what is produced (Finlay 2002). I think it is important to keep this understanding of fieldwork in mind when finding a way into ‘the field’, particularly in China, where it feels very difficult and it demands serious compromises. As researchers, our varied subject positions create distinct challenges and provide distinct opportunities. These are not always knowable in advance. While it is easy to focus on how quickly new obstacles spring up in the process of setting up and carrying out fieldwork, it is also worth noticing how new opportunities seem to appear out of nowhere. What seems like a roadblock, or a situation that is difficult because of who we are, can also contain opportunities for knowledge production based on these same constraints.

Bonham, Jennifer and Carol Bacchi. 2017. ‘Cycling ‘Subjects’ in Ongoing-formation: The Politics of Interviews and Interview Analysis.’ Journal of Sociology 53, no. 3: 687–703.

Cui, Ke. 2015. ‘The Insider–outsider Role of a Chinese Researcher Doing Fieldwork in China: The Implications of Cultural Context.’ Qualitative Social Work 14, no. 3: 356–69.

Finlay, Linda. 2002. ‘Negotiating the Swamp: The Opportunity and Challenge of Reflexivity in Research Practice.’ Qualitative Research 2, no. 2: 209–30.

Mazzei, Lisa A. 2013. ‘A Voice without Organs: Interviewing in Posthumanist Research.’ International Journal of Qualitative Studies in Education 26, no. 6: 732–40.

McDowell, Linda. 1992. ‘Doing Gender: Feminism, Feminists and Research Methods in Human Geography.’ Transactions of the Institute of British Geographers 17, no. 4: 399–416.

Sam Berlin is a PhD Student in the School of Geographical Sciences, University of Bristol. His research focuses on class, aspiration, and subjectivity in China. His current project is about small traders and futurity in a small Shandong city.